A floating object is always a fascinating eye-catcher that I like to put on my desk. Many conversations at this table got off to a nice start thanks to this do-it-yourself object.
So in the last few years I have recreated some „magnetic levitation“ projects from various publications.

But I was never really satisfied with the results.: Too big, too unstable, gigantic power consumption(;-), the flight stability was not very good and especially the necessary electromagnet always had to be somehow winded around a screw by myself. The results were often not very nice to look at, but above all only hardly reproducible.

So I had gained a lot of experience over the time  and a simple mechanical construction and a simple electrical circuit was created, which proved itself in all test setups: 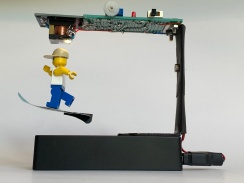 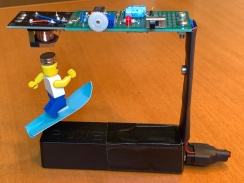 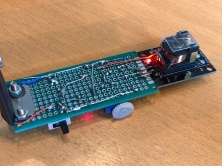 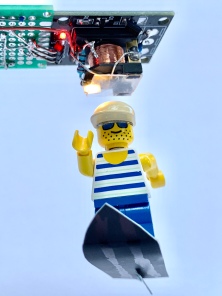 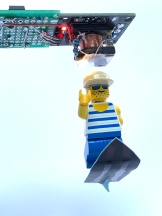 Some important results of my experiments:

# The HALL magnetic sensor used is an A1302 or its successor A1308 – the cheaper and widely used SS49 or similar types are NOT suitable. UPDATE: THE HALL-SENSOR SS49E WORKS AS WELL!

# The magnetic coil is a cheap modified 5V standard relay (tested: HW-482 /JQC-3FF-S-Z or JQC3F-05VDC) with built-in switching transistor from the world of microcontroller actuators. The coil starts anti-clockwise at the PLUS-contact.

# The permanent magnet has to be as strong as possible. At least two  but better more stacked NeoDym magnets work best.

# The non-modified relay has a U-shaped iron core. That core has to be changed to a J-shape by shortening the part that holds the middle-contact of the relay. Thus now only one magnetic pole points towards the „payload“

The next pictures  show the steps of modification regarding the relay: 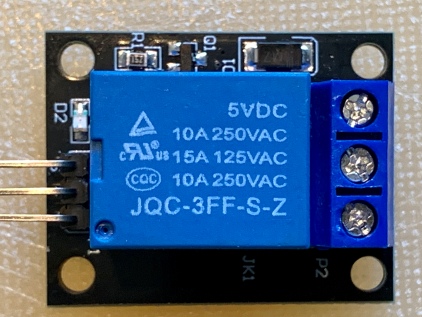 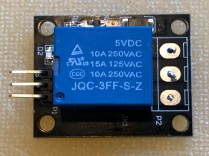 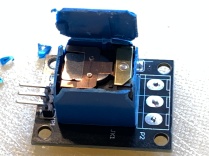 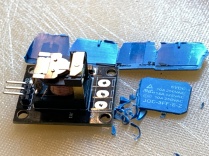 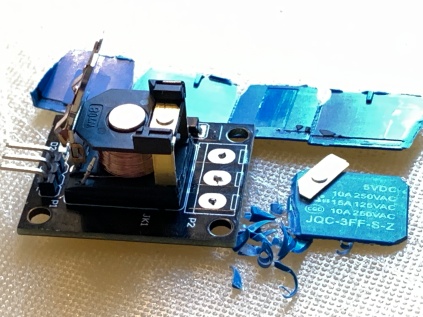 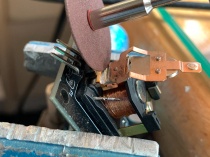 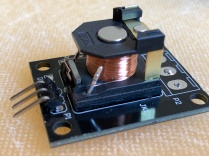 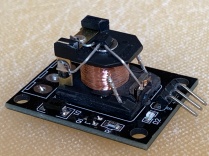 # Two neodymium permanent magnets in disc form with 10mm (or 12mm) diameter  and  2mm (or 3mm) height are  used to make a LEGO man, a screw or  a table tennis ball (with extra payload of a screw) float.

# VOut of U1 increases if the magnet comes near – if it decreases  turn the magnets around!!!

# Same behavior at output  if the electromagnet is switched on:  The Hall-sensor output rises about 0.2V. Else twist the two contacts of the coil!

#The power supply should not get very complicated. In the end it worked very well with only about 50mA  at 5V.  Thus e.g. a very simple USB power bank can do the power supply for a pretty long time – and can also serve as a safe stand.

# As a positioning aid, the relay’s original flyback diode has been replaced by a white LED with 220R series resistor – this LED only lights up when the object is at the right height and hovers. I found two good positions for this LED: Next to the Hall-sensor (= a bit tricky) or pointing from the side towards the magnets (= easy)

UPDATE REGARDING THE FLYBACK-DIODE/LED: It has turned out that it is important to keep the flyback current through the LED low, as too high a current keeps the magnetic field for too long, even when the transistor is switched off. This additional field prevents a good control loop and destabilises the flight attitude of the payload. On the other hand, the LEDs and the resistor are absolutely necessary as they limit the induction voltage at the relay transistor to a harmless level of below 50V. TWO WHITE LEDs with a 220 to max. 330Ohm resistor fulfilled this job very well.  See https://en.wikipedia.org/wiki/Snubber#Diode_snubbers

# An opaque plastic shield protects the HALL-Sensor against shortcut and mechanical stress.

# A PC slot bracket is used to keep the electromagnet at the correct height of about 8cm above the power bank without vibrations. The downside end of the plate gets angled and glued to the power bank with double-sided mounting tape. 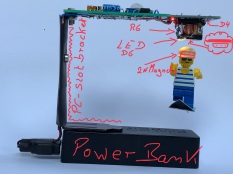 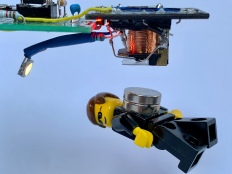 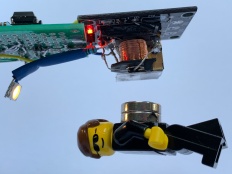 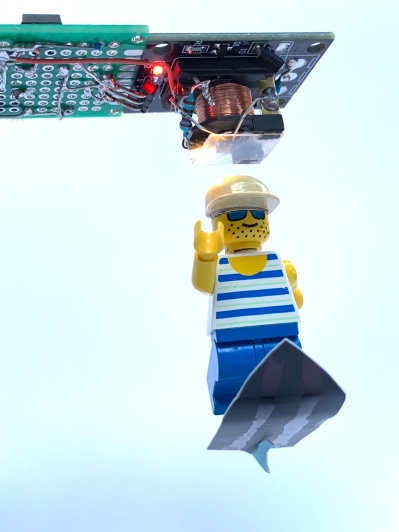 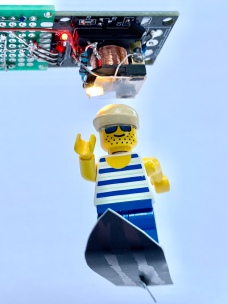 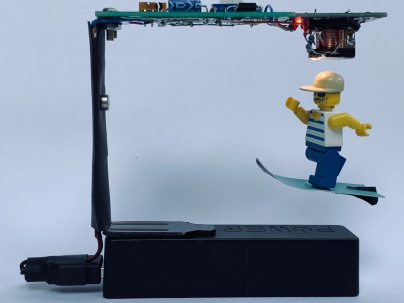 Important! The payload is mainly carried by the strong permanent magnets at a distance of approx. 15 mm below the core. The weak electromagnet only takes control over a small area of ​​about 2 mm by adding a small electromagnetic force. I’ve got the best results with at least two, better three, strong stacked magnets in the payload.

I modified three  5V-relays in combination with A1302-Hall sensors. In all  setups  with a Lego-man and two magnets as payload I had to adjust the potentiometer RV1 for a voltage of 3.45V +-50mV between GND and U1/Pin2 without a near magnet.  With SS49E sensor  this was 3.95V.  Take this as a starting point for the adjustment. The payload is now slowly lifted from below in the direction of the core until you find that it starts to be pulled upwards. The setting of RV1 gets readjusted arround this point. LED D6 gives a feedback for reaching the correct switch point.

For a basic adjustment  at first the hover point must be found. To do this, place a 20mm stack of small Post-It sheets between the magnets and the coil core while the circuit is not powered. The number of sheets is now lowered until close  to the point where the magnet just begins to be lifted up only a little bit while the stack of paper is in between.
Hold the magnet at this position and switch the circuit on. Adjust  RV1 so that there is a voltage of 0 mV between pin2 and pin3 of U1  and LED D2 just gets dark.
Now the payload is carefully brought to this point without a stack of paper. RV1 only needs to be corrected a little until the object „hangs“ safely. D6 now lights up because the solenoid turns on and off quickly.

This procedure of calibration is a bit tricky and depends strong on the weight of the „payload“  but  especially on the given strength of the (at least two ! ) strong permanent  magnets.  Don’t give up!!

I had a lot of fun with this and hope this description will make it easy to build such a „levitation project“.